1. An example of this process is applied to these small parts such as motorcycle cranks. After half-axis scanning hardening, 1/6 ~ 1/5 of the intermediate frequency voltage of the quenching process with the same inductor was used for scanning induction tempering. The disadvantage is that under tempering low temperature conditions, the current frequency of the original quenching heating power supply must be higher than the appropriate frequency. Therefore, the tempering of the hardened layer depends entirely on heat conduction, and its thermal efficiency is low.

2. Use another set of suitable lower frequency induction heating furnace and inductor for tempering. This method is widely used now. Because the tempering temperature of induction hardened parts is lower than the Curie point, and most of them are lower than 300℃. At this time, the current penetration depth at low temperature is usually 1/10 of the current penetration depth at 800°C. -1/40 Therefore, the current frequency selected for tempering the workpiece is much lower than the current frequency during quenching and heating. It is customary to use 1000 ~ 4000Hz. Some use power frequency directly, such as cylinder liners and flywheel ring gears.

Tempering inductors generally use multiple turns, the gap between the effective ring and the workpiece is enlarged, and the area of ​​the tempered part is often larger than the quenched area. When the semi-shaft adopts the scanning quenching process, its tempering also adopts induction tempering. At this time, another lower frequency power supply is used, and a multi-turn inductor is used to perform heating and tempering once. 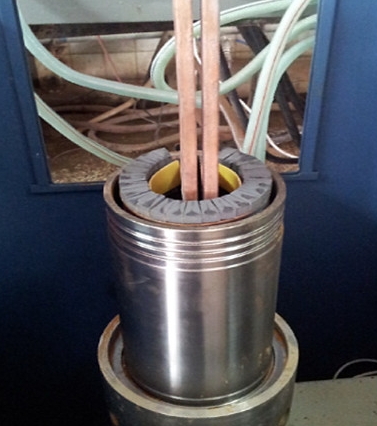